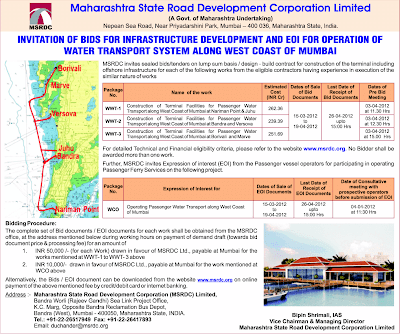 The Maharashtra State Road Development Corporation (MSRDC) on Monday invited bids for infrastructure development for a water transport system along the Mumbai’s west coast, thus setting the ball rolling on a much-anticipated project that has repeatedly run into controversy in recent years. While a build-operate-transfer (BOT) model had earlier been considered for the project, implementation will now be on a cash-on-contract basis. This means the staterun MSRDC is putting money into the project to get jetties and terminals constructed by contractors. Ownership of the new infrastructure, thus, would rest with the MSRDC. The consequence of this will be of benefit to commuters by way of cheaper tickets. Under the other model, developers were to build, own and maintain terminals and make profit over 30 years, making fares expensive. Once the project is completed, 11 hovercrafts and 28 catamarans are expected to run on routes from Nariman Point to Borivli. “We expect to complete the construction of terminals, to cost Rs 750-crore, in two-and-a-half years. We plan to appoint contractors to run hovercrafts and catamarans with a capacity of 200-350 passengers,” said MSRDC chief engineer Subhash Nage. To speed up work, three contractors will be appointed; four boat operators will be appointed to ensure early commissioning of services. By the end of 2014, Mumbaikars can expect to sail between Borivli and Nariman Point for about Rs 225 for a one-way trip. Six water terminals will be built, with two to eight berths for catamarans and hovercrafts. The terminals will be at Borivli, Marve, Versova, Juhu, Bandra and Nariman Point. Presently, a taxi ride from Borivli to Nariman Point costs about Rs 450 and takes one-and-a-half hours. The water transport fare between the points would be half this, the travel time being 50 minutes. Also, the trip will be free of noise and air pollution. The terminals will be provided with BEST buses and there is talk that boat operators can provide their own bus services to passengers. The services will be in intervals of 15 minutes during peak hours and 30 minutes otherwise. Ten routes/services have been tentatively planned, but “will be finalized after a study of financial feasibility”, said an MSRDC official. Though there is huge demand for better launches to serve Navi Mumbai, Alibaug and Uran, it has been consistently ignored. A project to start catamarans and hovercrafts from Ferry Wharf (Bhaucha Dhakka) to Nerul, Belapur and Uran continues to remain on the drawing board. At present, over 8,000 people travel daily to Mandwa while 2,000 take launches to Nhava and a similar number to Elephanta. At the Gateway, yacht owners take dinghies to reach their vessels because of the lack of a marina and good jetties. The water transport idea was recommended 40 years ago after studies by transportation consultants Louis Berger and LEA Associates The MSRDC took up the project in 2005, but ran into partnership disputes and legal hurdles In 2008, it cancelled a contract given to Satyagiri Shipping, which had won the bid for the project Pratibha Constructions won the next bid in 2010, but the MSRDC did not issue a work order because of cost and FSI issues Satyagiri and Pratibha, in addition to creating infrastructure, were also to operate services. But experts feared the arrangement would not work financially if commuter response was poor

Great information! I’ve been looking for something like this for a while now. Thanks!