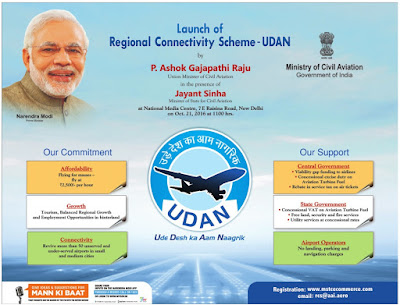 From January , the Centre will roll out its ambitious plan to introduce budget regional flying by connecting small towns by flights whose fares will be capped at Rs.2,500 per hour.
Termed “ude desh ka aam nagrik“ or Udan, this regional connectivity scheme will be funded by levying a fee on aircraft landing at bigger airports. Aviation secretary R N Choubey said the levy , “which will be a very nominal one“, will be announced by the month-end. It is estimated that if airlines pass on this levy to flyers, the increase in cost per ticket is unlikely to be more than Rs.60. Existing airlines are opposing the move to impose one more levy on flyers in the form of regional connectivity scheme (RCS) fee. They feel the government should have found some other way of funding the Udan scheme, instead of taxing passengers again.
Trying to allay their fears, junior aviation minister Jayant Sinha said, “We have taken three crucial steps to strike a balance between affordability for the common man and profitability for regional operators. Firstly, successful bidders will now have exclusive rights to operate a regional route for three years, up from the previous plan of one year. Secondly , an Udan flight operating from a small city to a metro like Delhi or Kolkata will have to pay no airport charges at the bigger airport. And finally , we have made it possible for entrepreneurs to lease planes in small numbers also to become regional operators. Earlier, it was not possible to do so.“
The minister said India had 16 under-served airports, which get less than seven flights a week. “These include places like Agra, Gwalior, Allahabad and Tezpur. Then there are 15 to 20 airports which are ready but don't get regular flights (like Jaisalmer). From January , 30 airports will be ready to receive regional flights under Udan scheme,“ Sinha said.