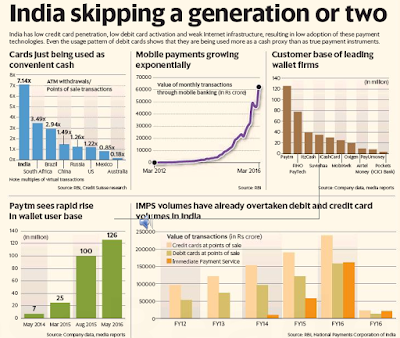 A month after introducing mobile-based payments architecture Unified Payments Interface (UPI), the National Payments Corporation of India (NPCI) is working on an upgraded version of UPI, to be released next year, that will contain features such as pre-authorized transactions and biometric authentication.
The new version of UPI, to be called UPI 2.0, will include new features such as electronic mandates that will allow users to pre-authorize transactions through digital signatures, as NPCI gears up to get tens of millions of new users on board UPI over the coming months.
In August, NPCI with the support of the Reserve Bank of India (RBI) and the Indian Banks’ Association created UPI and launched it in August. The system allows customers to safely and instantaneously pay for goods and services and transfer funds to others via their smartphones, almost as easily as sending a text message.
Since the launch of UPI, 20 banks have launched their UPI-based apps and mobile apps of 17 are available on the Google play store, Hota said. SBI and HDFC Bank are to join UPI soon.
Currently, on a daily basis, about 4,000 transactions are taking place from about 300,000 customers who have downloaded a UPI-based bank app. Other executives associated with UPI said the upgraded version will be compatible with the first version.
“UPI 1.0 will continue to mature... with better UI (user interface) and better features,” said Pramod Varma, chief architect at the Unique Identification Authority of India (UIDAI) and technical adviser to NPCI. “UPI 2.0 is an extension of additional capabilities and one of the big ones is electronic mandates that would come which allows me to need not authorize every transaction—I can pre-authorize through a digitally signed instrument.”
UPI 2.0 will be focused on integrating UPI with Aadhaar and the Bharat Bill Payment System (BBPS), said Dilip Asbe, chief operating officer of NPCI.
“By integrating with Aadhaar, it will enable iris authenticated (UPI) payments... we are hopeful to get RBI approval (for the same)... In case of BBPS, a user can do a card payment or use Internet banking (to make payments), we’ll integrate UPI as an additional mode of payment (to BBPS),” he added.
Axis Bank Ltd is one of the early bank adopters to launch its UPI mobile app a month ago. Since then, 100,000 users have registered and created a virtual payment address, said Sangram Singh, head (cards and payments business) at Axis Bank. The lender’s platform has clocked 60,000-65,000 transactions amounting to Rs.8.5 crore since late August.
Some banks are tying up with start-ups for UPI. For instance, Flipkart-owned PhonePe Internet Pvt. Ltd tied up with Yes Bank Ltd to launch a consumer-facing app in August.
Razorpay Software Pvt. Ltd, an online payment gateway for merchants, has partnered with several banks to offer payments on UPI. Another payment gateway Instamojo Technologies Pvt. Ltd has partnered with ICICI Bank Ltd to allow individuals and small businesses to collect payments via UPI on its platform.
In an interview, Infosys Ltd co-founder Nandan Nilekani said UPI will potentially disrupt payments in India and become a role model for other countries. “Basically it was building on the NPCI’s successes, building on the rise of the smartphone, it was building on the need to have a simple merchant, debit product, built on the need to have virtual payment addresses, etc.— so I think all this came together beautifully,” said Nilekani, former UIDAI chairman and one of the key brains behind UPI. NPCI has been working under Nilekani’s guidance on UPI since February 2015.
Nilekani added that UPI also gives India an edge over other countries like the US and China, where payments systems are primarily controlled by a few entities—in China, for instance, mobile transactions primarily go through platforms like WeChat and AliPay.
“With UPI, anyone can build on top of it and innovate—it’s open and inclusive. It’s almost like being on a highway without any tollgates,” he said.