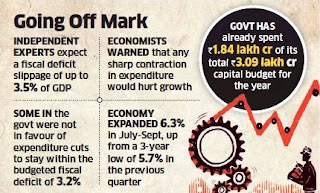 India’s fiscal deficit crossed the target set for 2017-18 by the end of November itself, triggering fresh concerns that it will stay so for the year.

The fiscal deficit for April-November was ₹6.12 lakh crore, or 12% more than the ₹5.47 lakh crore target for the year.

The deficit at the same point last year was about 14% less than the budget estimate.

India’s economy expanded 6.3% in the July-September period, up from a three-year low of 5.7% in the previous quarter.

On Wednesday, the government announced additional borrowing of ₹ 50,000 crore through dated government securities in the last quarter of the financial year.

Independent experts expect a fiscal deficit slippage of up to 3.5% of GDP.

The government said the numbers were not strictly comparable with last year because of the early presentation of the budget (on February 1 instead of the usual end-February), which allowed spending to start quickly.

Non-tax revenue was only 36.5% of the budget estimates with the Reserve Bank of India declaring a lower than expected dividend.

Net tax revenue was pegged at ₹7 lakh crore, 57% of the budgeted amount and below the 58.9% recorded a year earlier. This is largely on account of muted GST collections, which declined to ₹80,808 crore for November from more than ₹95,000 crore in September.

Spectrum auction that was budgeted to yield ₹50,000 crore is not expected to fetch much this fiscal year. The government has spent ₹1.84 lakh crore of its total ₹3.09 lakh crore capital budget for the year.