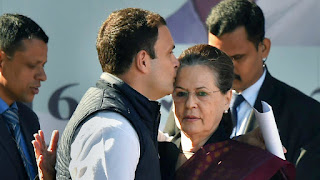 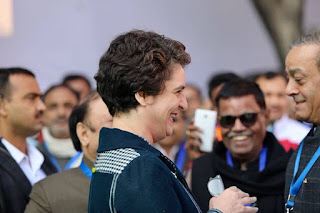 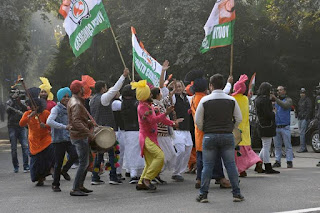 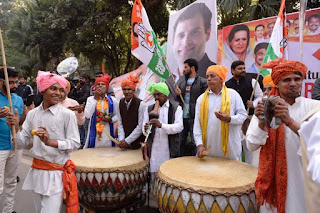 Rahul Gandhi took formal charge as Congress president, positioning himself as the main challenger to Prime Minister Narendra Modi, who he accused of dragging India back to the medieval ages and sacrificing amity and inclusiveness in pursuit of personal aggrandisement.

“Congress took India to the 21st century, but the PM, today, is taking us back to medieval times. We are now being compelled to imagine that businesses can be built without harmony, that only one man himself is the voice of reason. Expertise, experience and knowledge can be cast aside for personal glory,” said Rahul Gandhi at a function to mark his taking over from mother Sonia Gandhi.

The attack on Modi at a function in the AICC lawns seemed a continuation of the heated Gujarat campaign.

During the Gujarat campaign, Rahul had charged the Modi government and BJP with corruption in the Rafale deal and the PM hit back claiming a meeting of minds between Pakistan and Congress to unseat BJP.

Two days before the results to the Gujarat and Himachal Pradesh elections-—which exit polls predict will go the BJP way—are due, Rahul Gandhi showed no signs of being on the backfoot as he slammed the PM for promoting a monochromatic vision of India and saying he will stand firm in opposition.

“These regressive forces don’t win because they’re right, they win because they are powerful. Their power is manipulative and distorted and stains everything it touches. They can only defeat us if we back down,” the newly minted Congress chief said as he finally grasped his legacy after several will he, won’t he moments.

While declining ministerial assignments during UPA tenures, Rahul Gandhi became party vice-president in 2013, a move seen as a precursor to taking over from Sonia. But the wait continued after UPA crashed out of office in May 2014, at a time when Rahul was seen to be shedding his aversion to office. There has been intense speculation in the past few months which peaked around Diwali. The process finally gathered momentum in November with the election of president being scheduled.

The exchange of baton took place before admiring leaders and workers and was marked by a festive air and fireworks that interrupted Sonia Gandhi’s speech for a few minutes. Rahul’s sister Priyanka Gandhi along with husband Robert Vadra was also present as the party ushered in the sixth Nehru-Gandhi to hold the party chief’s post.

Rahul was presented with a “certificate of election” by the AICC’s election incharge Mullapally Ramachandran, the elevation marked yet another milestone in Congress’s tradition of political inheritance.

The leader’s immediate attacks on the BJP mascot indicate that he will continue to work towards reclaiming Congress’s default position as the alternative to the Modi government and leading an opposition alliance. This strategy is expected to play out in his leadership in Parliament too and will be keenly watched in the ongoing winter session. Rahul said the horrors of hate and violence are tarnishing the country around the world and “no amount of hugs” could repair the damage—a dig at the PM’s penchant of hugging foreign leaders including US President Donald Trump. Outgoing Congress chief Sonia Gandhi said, “Ours is a struggle for the soul of India.”Accusing Modi of self absorbed and self-promoting politics, he said, “It is acceptable for our foreign policy to lie in tatters so that one man can feel strong, and that everything in fact is subservient to the leader’s personal image.”

While Sonia struck an emotional chord with a short speech outlining defining moments of her life in the Gandhi family and her 19-year stint at the helm, former PM Manmohan Singh said, “I seek your forgiveness for not being able to resist an element of sentimentality in the few words that I am going to make.” Rahul spoke about Congress’ ideology but targeted politics of BJP and Modi which he termed as inimical to national interest. The emphasis on the arch-rival indicated no let up in the ongoing confrontation with Modi and BJP. “They attack the Congress and try to weaken us but they can only defeat us if we back down. Stand up to them,” he said.

The Congress leader also sought to reassure the old guard that will not be cast aside while hinting that he will tilt to promoting youth. Saying he wanted to turn the “grand old party” into “grand old and young party”, Rahul extended a special invite to the younger generation to join the Congress.