Submarine Karanj to be Launched Today 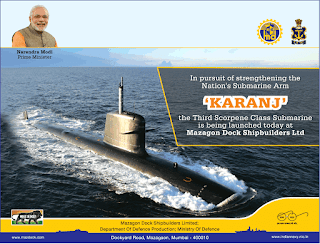 The third Scorpene-class submarine Karanj will be launched at Mazagon Dock Shipbuilders Limited in Mumbai.

Karanj is the third of the six Scorpene-class submarines being built by MDL under the Project 75 programme. The first one, INS Kalvari, was commissioned on December 14 last year. The second one, Khandari, has already been launched and is undergoing sea trials.

The Scorpene submarines are a primary modernisation requirement of the Indian Navy, which is currently faced with an ageing submarine fleet, and that too when the Chinese navy has a growing presence in the Indian Ocean. MDL in a statement said, “The third Scorpene class submarine Karanj will be launched at Mazagon Dock Shipbuilders Limited on January 31, 2018.” Navy Chief Admiral Sunil Lanba will be the chief guest on the occasion.

The contract for the construction and transfer of technology for six Scorpene submarines in series has Naval Group, formerly called DCNS, of France as collaborator and are being built by MDL.

According to MDL, the technology being used for construction of the Scorpene class submarines has ensured superior stealth features such as advanced acoustic silencing techniques, low radiated noise levels and hydro-dynamically optimized shape. “These stealth features give it an invulnerability, unmatched by most submarines,” said MDL. The submarines also have the ability to launch a crippling attack on the enemy using precision guided weapons. “The attack can be launched with both torpedoes and tube launched anti-ship missiles, whilst underwater or on surface,” said MDL.

A Shore Integration Facility has been developed at MDL for integration and simulation of various equipments of the Scorpene submarine combat system for which there was no facility available in the country.

The Scorpene deal for India was signed in October 2005 and the first submarine was to be delivered by 2012, but due to inordinate delays and teething problems it could not happen.

However, MDL said, “Close monitoring, proactive resolution of problems and concerted efforts to keep the assembly line moving resulted in MDL completing critical sub section fabrication of all six submarines, eleven months before the PERT date. Further the time taken to complete the fabrication of the 16 sub sections of a submarine came down from 39 months in Boat 1 to 20 months in Boat 2. This time frame of 20 months has been accepted by Naval Group as higher than their standards.”

MDL further states that the Scorpene submarines can undertake various missions such as anti-surface warfare, anti-submarine warfare, intelligence gathering, mine laying and area surveillance. The submarine is designed to operate in all theatres. This is important in light of the Chinese navy presence in the Indian Ocean.