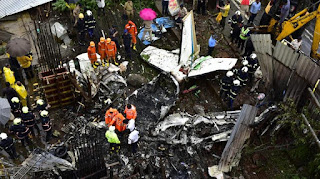 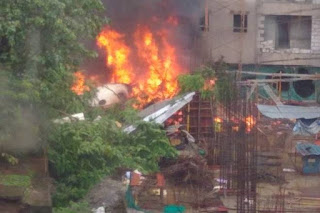 A 12-seater aircraft crashed in a crowded Mumbai suburb Ghatkopar, killing both the pilots and two aircraft maintenance engineers on board, besides a pedestrian.

This was the second air mishap in Maharashtra in two days. The pilot and flight test engineer of a Sukhoi Su-30M aircraft of Hindustan Aeronautics Limited had ejected safely after it crashed near Nashik.

The King Air C90 plane, which crashed at the Old Malik Estate near Ghatkopar telephone exchange, once belonged to the Uttar Pradesh government and was sold to UY Aviation. The aircraft had taken off from the Juhu airstrip on a test flight. It lost control when it was four nautical miles from Juhu, Air Traffic Control.

A team of DGCA officials rushed to the crash site for a preliminary investigation. A two-member team of the Aircraft Accident Investigation Bureau, which comes under the Civil Aviation Ministry, too reached the city to probe the crash.

DGCA officials traced the Aircraft Voice Data Recorder, which will help them piece together the events that led to the crash.

Investigators are likely to collect the wreckage of the plane in the next two days, he said.

Maharashtra Chief Minister Devendra Fadnavis too visited the crash site and said the air mishap would be probed.