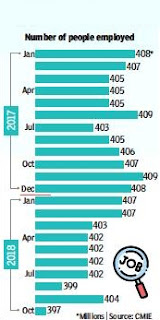 Unemployment rate in the country rose to 6.9% in October, the highest in two years, according to the Centre for Monitoring Indian Economy. Worse still, the labour participation rate—a measure of the proportion of adults willing to work—fell to 42.4%, the lowest since January 2016, CMIE said.

“Labour participation rate fell sharply after demonetization”, from around 47-48%, “and it has still not recovered,” the study said. “The small improvement in labour statistics seen in September turned out to be short-lived. October statistics point to a continuation of the deterioration in labour markets seen earlier,” the think-tank said. The estimated number of persons employed during October 2018 at 397 million was 2.4% lower than the 407 million persons employed in October 2017. “This sharp fall in the employment rate in October is perhaps the most worrisome measure of the labour markets,” CMIE said.