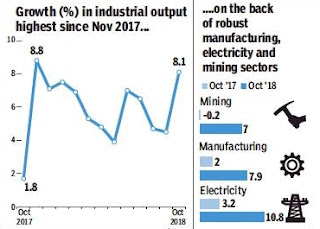 Retail inflation eased to a 17-month low in November on the back of sliding prices of food items, including vegetables, while industrial output growth soared in October due to robust manufacturing, electricity, mining and capital goods sectors.

The retail inflation data opens up the possibility for the RBI to ease interest rates or alter its stance when it reviews monetary policy. Most economists expect the central bank to act on rates only after the vote on account in February is approved by Parliament.

Retail inflation, as measured by the consumer price index, slowed to 2.3% in October, easing from the previous month’s 3.4%. Retail inflation in November 2017 was at 4.9%.

The food price index contracted 2.6% from previous month’s decline of 0.9%. Prices of vegetables fell 15.6% year-on-year, while pulses declined 9.2% during the month.

The RBI had downwardly revised its inflation estimates but had pointed to seven risks, including crude oil prices, urging a close vigil on the inflation trajectory in the months ahead.

Separate data showed industrial output growth rose to an 11-month high of 8.1% in October, up from previous month’s 4.5% and higher than 1.8% posted the same month last year.

The manufacturing sector, which accounts for the bulk of the index, grew 7.9% in October, higher than 2% registered in October 2017, while the electricity sector grew 10.8%, faster than 3.2% expansion in the year earlier period.

The capital goods sector, a key gauge of industrial activity, shot up an annual 16.8% in November compared with an expansion of 3.5% in the year earlier period. 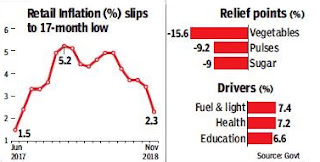