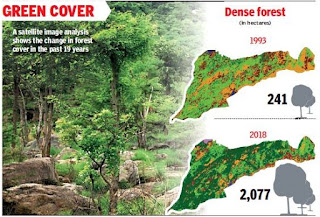 In the 1990s, Santhavasal, a dry deciduous mixed forest in Tiruvannamalai, was an example of how human interference can lead to environmental degradation of an ecologically diverse region. But, a 20-year-long intervention programme has shown the way to undo the destruction.

Deforestation for timber, overgrazing and agricultural activities had eaten into the forest area in the Eastern Ghats, affecting the soil, water and biodiversity. The water table in the agricultural fields of nearby villages had plunged to alarming depths, making it unsuitable for drinking and agricultural use. This came as a wake-up call for the people and foresters. As the first step, the Tamil Nadu forest department joined hands with Srinivasan Services Trust, an NGO and CSR arm of TVS Motor company, under TN Afforestation Project, and took up ecological restoration on 240 hectares of the Santhavasal reserve forest near Padavedu.

In 1999, the initiative began with the participation of 640 people from five nearby settlements. A new method, ‘Close to Nature Regeneration System’, was executed on more than 4,000 hectares. Earlier, forest areas used to be replanted with single variety of plants, often exotic, such as eucalyptus, but in the new system, a variety of indigenous species began to be used. After planting saplings, a reasonable amount of time was given for natural regeneration. Necessary soil and moisture conservation measures were also done through trenching and bunding. This prevented the soil from being washed away and allowed water to be impounded so that it would percolate easily and recharge groundwater.

On the socio-economic front, to protect and maintain the restored forests, village forest committees  were constituted in the five adjacent villages. To discourage tree cutting, forest produce such as fuel, fodder, green manure, and non-timber products that could be harvested from the restored forests on a sustainable yield basis went to VFCs.

Reforestation of species such as neem, Indian rosewood, peepal and amla were taken up on a large scale apart from sowing seeds of shrubs, legumes and grasses in particular areas. The result was a significant increase in the density of forest cover, diversity and variety of plants and improved groundwater levels. The villages of Santhavasal, Chinnasanthavasal, Kallankuthu, Kalvasal and Munivanthangal benefited with enhanced water supply and are fit to raise major crops like paddy and sugarcane again. An increase in population of fauna such as rabbits, porcupines, wild boars, reptiles and birds was also observed.

The programme also focused on restoration of 34 endemic species. These included satinwood, which is used for small luxury items and as a veneer in wooden furniture and rosewood, known for its premier timber and other flowering plants. The Santhavasal reserved forest is a model for private public partnership in conserving natural resources. Such measures help achieve economic, environmental and social outcomes for a climate sensitive state like Tamil Nadu.