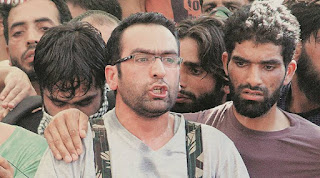 Naikoo, a former mathematics teacher at a private school, was close to the popular Hizb commander Burhan Muzaffar Wani, who was killed in Kokernag area of South Kashmir on July 8, 2016.

Security forces received a specific input three days ago saying Naikoo and his associates were hiding in his native village, Beighpora, in Pulwama.

“A joint team of 55 RR [Rashtriya Rifles] of the army, Special Operation Group of the Jammu and Kashmir police and CRPF [Central Reserve Police Force] launched a search operation late Tuesday evening in Beighpora area,” he said Early on Wednesday contact was established with Naikoo and his associates, who were in a deep underground hideout in one of the houses just a few metres from his own house, the source said.

“The firefight continued for a couple of hours. One of the militants tried to escape; he came out of the house and started firing,” the source said.

“However, he was killed in the retaliatory fire.

The security forces used three explosive devices to blast the underground bunker. From the debris two dead bodies were recovered – that of Riyaz and his bodyguard Adil,” he added.

Arms and ammunitions were also recovered from the site of the encounter.

“The same house in which the encounter took place… security forces had searched it hundreds of times in the last ten years,” a police official said.

“The killing of Riyaz Naikoo is being seen as a major win for security agencies. Naikoo was the main recruiter for the Hizbul Mujahideen, and the brain behind several civil and police killings,” he said.

“Riyaz Naikoo was the masterminded behind the revival of Hizbul Mujahideen in Jammu and Kashmir.

He also released videos/audios on a number of occasions carrying pro-Pakistan and separatist propaganda,” the police said in a statement.

“He executed a series of attacks on policemen, security forces and civilians. He resorted to brutal killings of civilians, branding them as informers.”

Following the encounter, locals came out of their homes and started pelting stones; protesters also vandalised vehicles. Dozens of people were injured in clashes with security forces.

The authorities disconnected mobile and internet services across Kashmir to prevent the law and order situation from deteriorating in the wake of the killing.

The Hizb commander had managed to evade security forces several times in the past, the police official said.

The 35-year-old Riyaz Naikoo joined militancy following the death of the teenager Tufail Mattoo in 2010, who was allegedly hit by a teargas shell fired at him from a close range by the J&K police on June 11, 2010. The teenager’s killing led to widespread protests in the Valley.

Naikoo, who was known by the nom de guerre Mohammad Bin Qasim, became the operational chief commander of the Hizb after the successor of Burhan Wani, Mohammad Yasin Itoo, alias Mehmood Ghaznavi, was killed along with two of his associates in an 18-hour encounter with a joint team of police, army and CRPF at Awnira, Zainapora village, in South Kashmir’s Shopian district in August 2017.

Naikoo was on the list of 12 most wanted militants issued by the army in 2017. He carried a reward of Rs.15 lakh on his head.

In 2018, the police detained Naikoo’s father Assadullah Naikoo, but was forced to release him after the Hizbul Mujahideen kidnapped 11 policemen and their families within just four hours in retaliation.

Later all the policemen and their kin were released by the militants outfit.

Meanwhile, two militants were killed in another encounter with security forces in Shaar Shali village of Khrew area in South Kashmir’s Pulwama district.

According to the police, the operation, which was halted during the night, resumed on Wednesday morning after evacuation of all civilians to safer places.

On Tuesday, the Director General of Police, Dilbagh Singh, warned that anti-militancy operations would be intensified further across Kashmir.