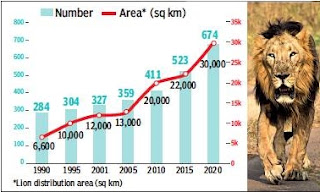 In these times of Covid crisis, wildlife conservationists have something to cheer about. India has recorded a 29% increase in the population of Asiatic lions, living in Gujarat’s Gir forests, over the past five years with their numbers going up from 523 in 2015 to 674 in 2020.

The period also saw a 36% rise in the distribution area of the lions—from 22,000 sq km in 2015 to 30,000 sq km in 2020. Currently, Asiatic lions are found in protected areas and agro-pastoral landscape of Saurashtra, covering nine districts of Gujarat.

The increase in lion count this year shows one of the highest growth rates so far. Last year, India had reported similar encouraging figures on tiger population. The country had recorded highest ever increase of 33% in its tiger population—from 2,226 in 2014 to 2,967 in 2018.

The data on the population of Asiatic lions has been compiled under ‘Poonam Avlokan of Asiatic Lions’—an exercise conducted by the Gujarat forest department on June 5-6, using block count method in the cluster of villages.

The department deployed 1,400 personnel for the exercise in the Asiatic lion landscape. They used GPS location, number of individual identification marks, radio-collar numbers and statistical software to arrive at the figures.