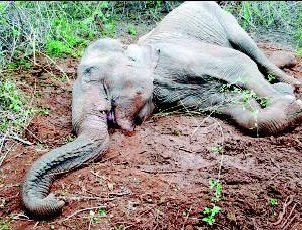 Torrid summer and the dry forest tracts in Tamil Nadu continue to take their toll on the wildlife with yet another elephant dying in the Erode forest region on Wednesday. It is the fifth elephant death in the region since December. A female elephant, about 20 years old, collapsed near the Varathupallam dam in the Andhiyur jungles of the Erode Forest division on Tuesday morning. A veterinary team rushed to examine the elephant and suspected it might be suffering from heat fatigue and severe worm infection caused due to drinking contaminated water. About 20 bottles of glucose were given to the elephant which was battling for life. After a day’s struggle, the elephant died on Wednesday morning. During summer, wildlife, especially elephants, from Thepakkadu in Mudumalai move towards Mettupalayam, Bhavanisagar, Sathyamangalam and Erode before reaching Karnataka forests in search of water and fodder. Usually, elephant herds traverse within a migratory area, ranging between 70 sqkm and 500 sqkm, every year. As the green cover and the water holes in the forests have gone dry, elephants are forced to drink slushy and worm-infested water. Often, sewage from the human habitations along the river course contaminates the water holes, say wildlife activists. In the last six months, at least five elephants have died due to severe heat conditions and suspected worm infections. Wildlife activists call for a comprehensive study on the "source" of infections caused to the elephants. "It is an alarming trend. For, more elephants die during summer due to infections than poaching now. Last year, at least 10 elephants died in the Sathyamangalam, Erode and Coimbatore forest divisions due to suspected worm infections and heat conditions.