The small village of Belsar in Purandar tehsil hosts a population of just about 3,500 people. In the beginning of the month of July, a few cases of fever were reported here. From among these, samples of five patients were sent to National Institute of Virology, Pune on July 16. From these, three people were found infected with chikungunya.

So, between July 27 and 29, a team of experts from NIV, headed by Dr Yogesh Gurav, head of the dengue and chikungunya department, visited Belsar. The team collected 41 suspected samples from the village and surrounding areas. And, as per NIVs report on 30 July, out of these samples, 25 people were diagnosed with chikungunya, three with dengue and samples of a 50-year-old woman were diagnosed with Zika virus — the first such case in the state.

Simultaneously, the woman has also been with chikungunya. The team of state surveillance officer Dr Pradeep Awte, assistant director Dr Kamlapurkar, Dr Mahendra Jagtap, and other experts from various departments visited Belsar on Saturday. “The woman from Belsar has recovered completely. She has no symptoms. Also, none of her family members share the symptoms,” informed Dr Awte, adding, “The team conducted disease surveillance of the village. An emergency meeting was held between the village sarpanch, gram panchayat members, staff at the Primary Health Centre (PHC) of Belsar and medical officers of Purandar tehsil, during which preventive measures and awareness were discussed. Administrative officials, gram panchayat members, medical officers, etc. from Belsar and adjoining areas were issued orders to conduct various prevention and awareness measures.”

Zilla Parishad chief executive officer Ayush Prasad said, “The Pune district administration requests people not to panic with regards to Zika virus. It’s due to the proactive work of field teams that the case was detected. We are working very hard to contain the spread and make the best healthcare available to our residents.”

According to the World Health Organisation, Zika virus is primarily transmitted by the bite of an infected mosquito from the Aedes genus, mainly Aedes aegypti, in tropical and subtropical regions. This is the same mosquito that transmits dengue, chikungunya and yellow fever. Zika virus is also transmitted from mother to foetus during pregnancy, through sexual contact, transfusion of blood and blood products, and organ transplantation.

The output of eight core sectors grew 8.9% in June, mainly due to a low base effect and uptick in production of natural gas, steel, coal and electricity.

The eight infrastructure sectors of coal, crude oil, natural gas, refinery products, fertilisers, steel, cement and electricity had contracted by 12.4% in June 2020 due to the lockdown restrictions imposed to control the spread of coronavirus infections.

During April-June period this fiscal, the eight sectors grew by 25.3% against a contraction of 23.8% in the same period last year.

According to the central government, one more atomic power plant with 700 MW (Unit 3 at Kakrapar Atomic Power Project, Gujarat) was connected to the grid in January this year.

When the third unit at KAPP starts commercial generation, then the total atomic power generation capacity will go up to 7,480 MW.

The government has also accorded administrative approval and financial sanction for the construction of 10 indigenous 700 MW Pressurized Heavy Water Reactors to be set up in fleet mode.

On progressive completion of the projects under construction and accorded sanction, the total nuclear capacity is expected to reach 22,480 MW by 2031 (NPCIL's capacity 21,980 MW, Bhavini 500 MW).

"This fiscal we will be spending about Rs 18,000 crore as capital expenditure on our ongoing projects. The funding will be through a mix of internal accruals, central government budgetary support and long-term borrowings. The first two will be about 30 per cent, and the borrowings will be about 70 per cent of the project cost," Sharma had said. 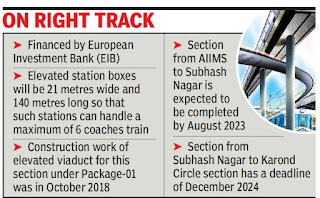 Medicinal plants cultivation gets a boost in Bundelkhand

Cultivation of medicinal and aromatic plants like Lemongrass, Sataver, Ashwagandha, Khas and others can prove to be a boon for farmers in Bundelkhand region as these medicinal plants require less water and can stand in hot and humid weather conditions of the region.

This was said by chief scientist Alok Krishna of the CSIR-Central Institute of Medicinal and Aromatic Plants during a workshop organized by the institute and GIZ India in Lalitpur on strengthening marketing, processing and cultivation of the medicinal and aromatic plants in the Bundelkhand region.

Krishna highlighted how medicinal plants can adapt to the climatic conditions of the region and bring financial gains to the farmers. “In just eight months a farmer can yield 50 litres of lemongrass oils. Lemongrass cultivation needs no special arrangements to save the plants from extremely hot conditions nor does it need too much water,” he said and added that a road map for the agrarian growth will soon be prepared for the region by the CSIR-CIMAP.

“Bundelkhand can be developed as an ecotourism spot as it has a good forest cover. Also, scientific goat farming in which scientific practices are used for better milk production can help double the income of goat farmers in the region,” Krishna said Lectures on goat farming were delivered by expert Anupam Dixit from the Central Institute of Goat Farming Mathura and senior scientist Ravi Ranjan from Central Institute for Research on Goats, Mathura who highlighted that goat farming can further help in increasing income of the people in Bundelkhand region.

Pench among 14 tiger reserves to get elite tag

Fourteen tiger reserves of India, including three each in Assam and Madhya Pradesh, have attained the globally accepted Conservation Assured |Tiger Standards accreditation, the environment ministry announced on International Tiger Day on Thursday.

Surprisingly, the three most popular tiger reserves in terms of tourist footfalls — Corbett (Uttarakhand), Ranthambore (Rajasthan) and Bandhavgarh (Madhya Pradesh) — did not get the CA|TS tag which is a conservation tool for best practices and standards to manage tigers.

Drawing attention to this fact during a function to share details of the elite tag of tiger conservation areas, environment secretary R P Gupta said, “When I saw the list, I found that the 14 areas (reserves) are such where tourists’ presence is not that much. So, it’s very vital that we just don’t make these tiger reserves a tourist destination as our topmost priority.”

The 14 reserves which figured in the list include Manas, Kaziranga and Orang in Assam; Sundarbans in West Bengal; Valmiki in Bihar; Dudhwa in Uttar Pradesh; Panna, Kanha and Satpura in Madhya; Pradesh; Pench in Maharashtra; Anamalai and Mudumalai in Tamil Nadu; Parambikulam in Kerala; and Bandipur, Karnataka.

India rejected the recent “elections” held in PoK, while simultaneously rejecting a reference to the CPEC in a recent Pakistan-China joint statement, saying it lies in India’s territory that has been illegally occupied by Pakistan and which is resolutely opposed by India.

The Indian response also covered the reference to Jammu & Kashmir in the joint statement with the MEA spokesperson saying Union Territories of J&K and Ladakh are an integral and inalienable part of India.

Ministry spokesperson Arindam Bagchi said India lodged a “strong protest” with the Pakistan government on a “cosmetic exercise” to hold elections in PoK.

The election exercise, Bagchi said, is nothing but an attempt by Pakistan to camouflage its illegal occupation and the material changes undertaken by it in these territories.

On the CPEC, which India has opposed on the grounds that it violates its sovereignty, the MEA spokesperson said, “We resolutely oppose any attempts by other countries to change the status quo in areas illegally occupied by Pakistan as also to Pakistan bringing up any material change in Indian territories under its illegal occupation.

“We call upon parties concerned to cease such actions.”

Asked to respond to a meeting between Taliban leader Mullah Baradar and Chinese foreign minister Wang Yi, the MEA spokesperson avoided commenting on the meeting as such, but said India “wishes to see an independent, sovereign, democratic and stable Afghanistan, at peace with itself and neighbours.

“Unilateral imposition of will by any party will not be democratic, cannot lead to stability, and cannot provide legitimacy. Gains over the last two decades should be preserved.”