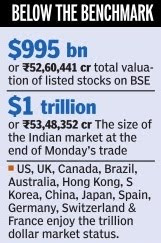 Fears of a further economic slowdown and policy paralysis at the Centre prompted foreign funds to sell aggressively on Tuesday, sparking a 204-point fall in the sensex to 15,175, a28-month closing low. Selling by FIIs also had its impact on the rupee, which again dipped below the 53-level against the US dollar in intra-day trade but settled at Monday’s level of 52.89. The combined effect pushed India out of the elite club of countries with a trillion dollar in market capitalization after being in this group for about three-and-a-half years. It was on May 28, 2007, at a time when the rupee was showing unusual strength against the dollar and hovered around the 40 mark that India had first entered the $1-trillion market cap league. Lately, the twin effect of rupee’s weakness and the slide of the market combined to drag it below the trillion dollar mark. According to Bloomberg data, so far this year India’s market cap has gone down by 38%, making it the worst performing market among the 12 countries that were in the trillion dollar club.