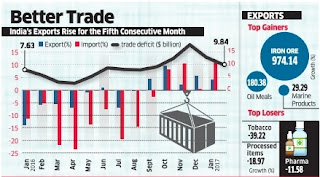 Improved demand from the United States, European Union and Japan helped increase India's exports for the fifth month in a row in January, indicating that demonetisation has not hit exports as much as feared. A faster increase in imports, however, widened the trade deficit.

As many as 17 out of 30 exporting sectors showed an increase in shipments, but labour intensive sectors such as leather, carpets, and gems and jewellery reported a fall in exports.

Global trade is expected to have grown about 1.7% in 2016 from the previous year. Exports got a boost from higher crude prices. Among non-oil merchandise exports, engineering goods did well while gems and jewellery, and drugs and pharmaceuticals saw a decline.

Non-oil, non-gold imports rose 4.2% in January, in line with 4.4% rise in the previous month, driven by coal imports.