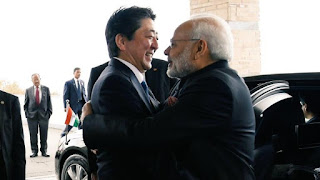 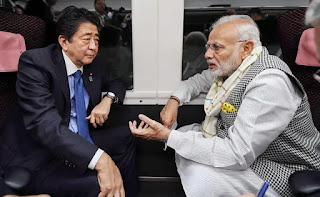 Japanese Prime Minister Shinzo Abe described Narendra Modi as “one of my most dependable and valuable friends” while welcoming him into his holiday home overlooking the iconic Mount Fuji on Sunday. In a message in Japanese newspapers, Abe said he would be a “friend of India for life”.

“At the time when Japan was not so wealthy, Prime Minister (Jawaharlal) Nehru introduced PM Kishi in front of thousands of people as the Japanese prime minister whom he respects,” Abe said. Kishi was Abe’s grandfather. “Engraving the history in my heart, I have devoted myself to nurturing this friendship with India,” he added.

Modi and Abe held informal talks at a picturesque resort near Mount Fuji and visited a factory of industrial robot manufacturer Fanuc as they spent about eight hours together on the first day of a two-day summit.

Modi, who arrived in Japan on Saturday evening to attend the 13th India-Japan annual summit, has said the partnership between the two countries has been fundamentally transformed and has been strengthened as a “special strategic and global partnership”.

The two leaders took a stroll following which Abe hosted a luncheon for Modi at a scenic resort by Mount Fuji. Modi presented Abe two handcrafted stone bowls and ‘dhurries’ made from rose quartz and yellow quartz stone sourced from Rajasthan. A Jodhpuri wooden chest from Rajasthan with traditional work was also presented. The gifts were specially crafted for Modi’s visit.

Later in the evening, in a special gesture, Abe hosted Modi at his villa near Lake Kawaguchi in Yamanashi for a private dinner. It is the first time that Abe has invited a foreign political leader to his holiday home in the village of Narusawa.

“Extremely grateful to PM Shinzo Abe for the warm reception at his home. I am truly honoured by this gesture. PM Abe also taught me the Japanese way of eating food using chopsticks,” Modi tweeted. In September last year, Modi had hosted Abe in his home state Gujarat.

After the dinner, the two leaders left for Tokyo by train. They will hold a formal summit in Tokyo on Monday, during which strengthening bilateral security and economic cooperation is expected to be high on the agenda.

During the formal summit, Modi and Abe will discuss a range of issues including defence and regional security. Besides bilateral issues, the two leaders are expected to deliberate on a range of regional and global issues including the situation in the Indo-Pacific region.

India is also hoping to have some kind of synergy or integration between Ayushman Bharat scheme, which is the largest medicare programme of its kind globally, and the Japanese programme which is called Asia Health and Wellbeing Initiative.