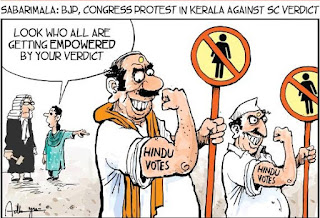 With three days left for the Sabarimala temple to open for monthly poojas, thousands of Ayyappa devotees took to the streets in Kochi against the Supreme Court verdict allowing women of all age groups into Sabarimala temple, even as activist Trupti Desai announced plans to visit the hill shrine soon.

The Communist Party of India (Marxist)-led Left Democratic Front (LDF) government, which decided to implement the Supreme Court ruling, held a meeting to evaluate preparations carried out for pilgrims arriving at the temple which will open for monthly poojas on Wednesday.

Although the government has not reacted to Desai’s planned trip to the temple, it has evoked sharp reactions from devotees and the Bharatiya Janata Party, which is campaigning against the entry of women into the shrine.

Holding placards bearing pictures of Lord Ayyappa and chanting hymns, protesters marched through the busy roads of Kochi, the state’s commercial hub, after launching the stir from a Shiva temple there. The faithful, a large number of them women, urged the Central and state governments to intervene in the matter to protect the sanctity of the centuries-old rituals and traditions of the shrine.