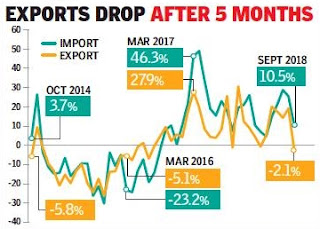 India’s exports declined over 2% in September, despite a steep depreciation of the rupee, but the government dismissed it as a blip and blamed high base for the first fall in value of shipments in five months.

A late evening statement showed a decline across sectors — from gems and jewellery (down 22%) to readymade garments ( down 33.6%). On the other hand, gainers included oil products (27%) due to higher global prices, along with plastics & linoleum (28%), and chemicals (17%).

Typically, exports become more attractive due to a weakening currency. The rupee has depreciated over 15% since January, making it the worst performing Asian currency so far this year. But, exporters said they have gained little so far since the orders were booked before rupee’s free fall began. Besides, buyers are now demanding lower prices citing a weaker rupee.

In September 2018, exports were estimated at close to $28 billion, compared to $28.6 billion a year ago. Imports, however, rose 10.4% to $42 billion, resulting in a trade deficit of nearly $14 billion. Oil imports surged 34% to $11 billion, while gold shipments were 51% higher at nearly $3 billion, mounting pressure on trade deficit.