Delhi is also our startup capital 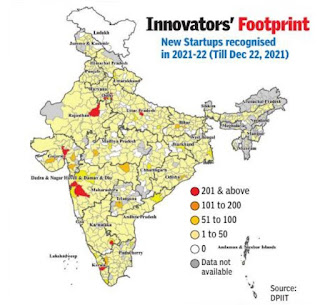 Delhi added over 5,000 recognised startups—the highest among cities —between April 2019 and December 2021 against 4,514 in Bengaluru, the Eco Survey says. Maharashtra, with 11,308 recognised startups, tops the charts among states. At least 14,000 new startups were recognised in India last year, up around 20 times in 5 years.

Last year, India’s booming startup ecosystem, too, set new records. While 44 startups became unicorns (valued at more than $1 billion), India overtook the UK to emerge as the country with the third-highest number of unicorns after the US and China that added 487 and 301 unicorns respectively in 2021.

For the rapid progress, stalwarts in the startup sector lauded the government’s Startup India initiative launched in 2016. Government recognition offers several benefits to a startup, including exemptions on income tax and capital gains. Under the digital initiative, other than having access to alternative investment funds, startups enjoy the benefit of an easier winding down process, as well. India boasts over 80 unicorns with an overall valuation of around $278 billion, while the total number of recognised startups in the country currently stands at 61,400.

The department for promotion of industry and internal trade, which earlier said government-recognised startups have created around 6. 5 lakh jobs in the country, wants to register around 50,000 new startups in the four years. The survey also pointed to the growth of startups in the space sector that shot up from 11 in 2019 to 47 last year. The domestic space sector, which currently accounts for 2% of the $447 billion global space economy, is expected to capture a much larger share going forward.