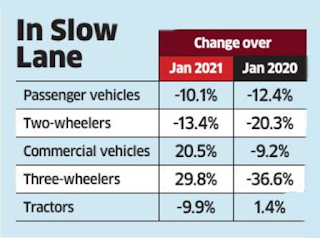 Retail of automobiles sales continued on a downward clip as semiconductor shortage and poor rural sentiment impacted demand, but vehicle retailers remain hopeful of an improvement in the coming months.

Registration of vehicles with regional transport offices, which is a good proxy for retail sales, declined by 11% year-on-year in January. Registrations were down 18% compared to the pre-Covid month of January 2020, as per data from the road transport and highways ministry's VAHAN platform.

Two-wheelers remained the category under maximum pressure with the rural economy being in disarray. Meanwhile, passenger vehicle or car sales took a hit due to poor availability of semiconductor chips despite robust consumer demand. Commercial vehicle and three-wheeler registrations grew year-on-year, however, on an exceptionally low base. Compared to the pre-pandemic period, both categories remained in the red.

Data were compiled by the Federation of Automobile Dealers’ Associations, a lobby of vehicle retailers. The data is incomplete as only 1,379 out of 1,590 RTOs in the country are on the VAHAN platform. But they paint an accurate picture in terms of trends.

The budget announcement by Finance Minister Nirmala Sitharaman to construct 25,000 kilometres of highways in FY23 and other infrastructure spending augurs well for CV sales. Meanwhile, the government’s plan for increasing rural spending may help two-wheeler, tractor and entry-level car sales.

The average inventory with car dealers was about 8-10 days’ worth at the end of January compared to the industry norm of holding a month of inventory. Two-wheeler dealers had 25-30 days of inventory on average, a FADA survey found.