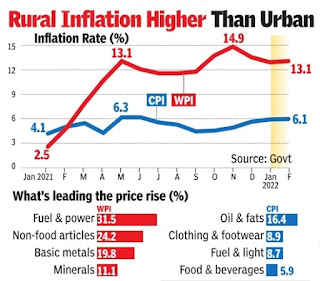 Retail inflation inched up marginally to an eight-month high in February on the back of rising food & beverage, clothing & footwear prices, while wholesale price inflation remained in double digits for the eleventh consecutive month, posing a policy challenge for authorities battling hardening price pressures against the backdrop of Russia’s invasion of Ukraine.

Inflation, as measured by the Consumer Price Index, rose an annual 6.1% in February from 6% in January. Retail inflation was at 5% in February 2021. Inflation in rural areas was higher at 6.4% while in urban centres it was at 5.8%.

Food and beverages inflation rose to a 15-month high despite some moderation in eggs, vegetables, pulses and sugar.

Edible oil prices remained robust amid supply disruptions and rose by 16.4% and are likely to pose a challenge in the months ahead. Soaring crude oil prices are also expected to put pressure on prices. RBI governor Shaktikanta Das had last month said that there was no need for surprise or alarm over the 6% retail inflation number.

Separate data showed inflation, as measured by the Wholesale Price Index, rose an annual 13.1% in February from 13% in January on the back of higher prices of manufactured products, crude and natural gas and primary non-food articles.

Inflationary pressures around the world have soared due to the impact of the war in Ukraine as value chains have been disrupted. From crude oil to metals to fertilisers, prices have surged and are expected to rule higher depending on the extent of the war. “The next step would be from the RBI. Ideally a revision in the forecast of inflation as well as stance would be expected in the April policy,” said Madan Sabnavis, chief economist, Bank of Baroda.

An HDFC Bank note said, “We do not expect the RBI to change policy rate at its April meeting. It is likely to look through inflation prints and sway towards supporting growth. ”