Tughlaqabad: Down Under, A Four-Level Metro Station 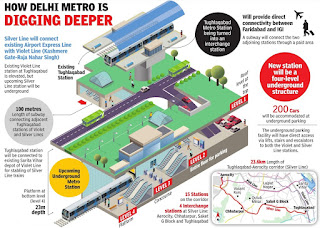 By 2025, south Delhi will have got a new transport hub in Delhi Metro’s Tughlaqabad interchange station. The station of the upcoming Silver Line (Tughlaqabad-Aerocity) will facilitate the interchange with the existing Tughlaqabad station of the Violet Line (Kashmere Gate-Raja Nahar Singh) and will be the second in the network to feature an underground parking facility.

A Delhi Metro Rail Corporation spokesperson said that the construction of the underground sections of the 23.6-km Silver Line will start this year. “The tenders were awarded this month after necessary approvals from the Japan International Cooperation Agency,” the spokesperson said.

The new station has been designed as a four-level underground structure with the platform at the bottom level at an approximate depth of 23 metres. Above the platform level is the concourse and then an entire floor for parking above it. The roof will be level with the ground surface.

“The underground parking facility will accommodate around 200 vehicles. It will have direct access via lifts, stairs and escalators to both the Violet and Silver line stations,” he said. Tughlaqabad will be the first ever interchange facility of Delhi Metro to have an underground parking facility and only the second station after Dhansa Bus Stand on the Grey line (Najafgarh-Dhansa Bus Stand) to have such a provision.

A subway is to be constructed to connect the new and the old Tughlaqabad stations. It will be less than 100 metres in length and will provide quick transit facilities to the passengers from one corridor to the other.

“After the opening of this new line, passengers from farflung areas in Faridabad, Haryana, will save time getting down at the Tughlaqabad interchange and avail the direct connectivity to the domestic airport,” the DMRC official said. “At present, the commuters on the Violet Line have to reach Central Secretariat and then take the Airport Express Line to reach the domestic and international airport terminals, taking around an hour and half for the trip. ”

The construction of the priority corridor is expected to be completed by 2025 and the spokesperson said the preliminary mobilisation has been started and preparations are on to start the construction work.

The Aerocity-Tughlaqabad corridor will have four elevated stations and 11 underground stations. Apart from the Tughlaqabad station, the corridor will have interchange facilities at three other stations: Aerocity, Chhatarpur and Saket G Block. “The Tughlaqabad station, being a terminal station of the new corridor, will also be connected to the existing Sarita Vihar depot via a tunnel,” the spokesperson said, adding that the

Sarita Vihar depot, which currently only caters to the trains of the Violet Line, is being expanded to accommodate the Silver Line trains.

DMRC initially planned to construct a train depot over 77 acres at Rangpuri Pahadi near Vasant Kunj for the trains running on the Silver Line. However, since the corridor passes through the southern Ridge, DMRC looked at alternatives, aiming to reduce the impact of constructing the new corridor on the green lungs of Delhi. As the construction of the depot might have resulted in the felling of around 8,000 trees on the land earmarked for it, DMRC dropped the plan to build a depot altogether. Instead it opted to extend the Silver Line beyond the terminal station at Tughlaqabad upto the Sarita Vihar depot.