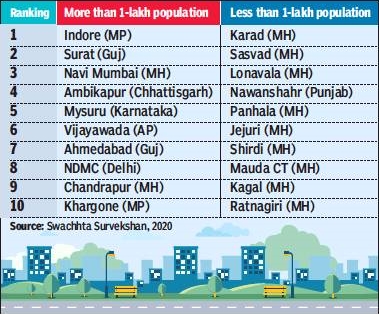 Indore retained the title of cleanest city for the fourth time in a row while Surat jumped to second position in this year’s swachhta ranking from 14th place in 2019 among cities with more than one lakh population. Navi Mumbai improved its position this year to become the third cleanest from last year’s seventh.

New Delhi slipped to the eighth position this year compared to fifth rank last year. It has been ranked as the country’s cleanest capital.

Two cities each from Madhya Pradesh, Gujarat and Maharashtra made it to the top 10 cleanest cities in this million plus population category.

Among cities with less than one lakh population, Karad in Maharashtra held its position as the cleanest city. As many as nine out of the top 10 cities and towns in this category were from Maharashtra.

Congratulating the top ranked cities, Prime Minister Narendra Modi tweeted, “May other cities also be inspired to further ramp up their efforts towards ensuring cleanliness. Such competitive spirit strengthens the Swachh Bharat Mission and benefits millions.”

The results were announced by housing and urban affairs minister Hardeep Singh Puri. This is the fifth edition of the annual cleanliness survey, which covered areas under 4,242 urban local bodies in a record 28 days. PM’s constituency, Varanasi was declared as the cleanest Ganga city in this year’s survey.

This year the survey has also evaluated cities in two other categories; cities with more than 10 lakh population and those with one lakh to 10 lakh population. Responding to a question about the sub-categorisation, housing and urban affairs secretary Durga Shankar Mishra said bigger cities argued that they have to face more complex challenges and the below 1 lakh and above 1 lakh categories need to be revisited.

For the past two years, the ministry has discontinued the practice of putting out the entire list of cities and their ranking. “The main objective of this Swachh Survekshan is to encourage urban local bodies and their leadership to make them clean. Why should we demotivate people?” Mishra reasoned.