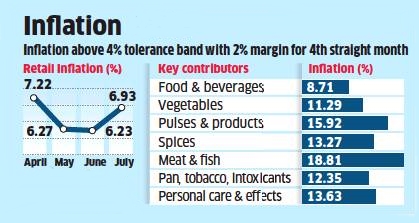 Retail inflation accelerated for the fourth successive month to 6.93% in July, on the back of a further rise for food prices. The reading is well above the 6% outer band of the central bank’s inflation target.

The Reserve Bank of India's monetary policy committee had last week decided to hold key rates, stating that upside risks to food prices remained. The central bank has a 4% consumer inflation rate target with a two-percentage point band on either side.

The likelihood that the MPC would persist with a rate pause in its October meeting has climbed sharply and a final rate cut is likely to be deferred to the December or February 2021 meeting.

Higher inflation during the ongoing pandemic is due to supply-side disruptions and not demand led.

Heavy rainfall in many areas may have also contributed to supply disruptions.