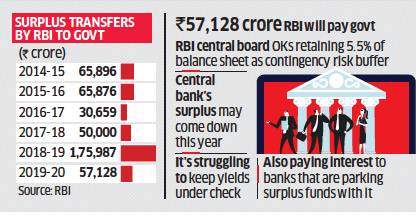 The RBI will pay a dividend of ₹57,128 crore to the government for the year ended June, less than half of what it did last year when it transferred the entire surplus and also a part of its excess capital after a tug-of-war with the State.

The central bank’s board approved retaining at least 5.5% of the capital risk buffer, the lower end of the 5.5-6.5% of the RBI balance sheet recommended by the Bimal Jalan committee.

“The board also approved the transfer of Rs 57,128 crore as surplus to the central government for the accounting year 2019-20, while deciding to maintain the Contingency Risk Buffer at 5.5%,” the RBI said in a statement after its board meeting.

As the RBI shifts its annual accounting year to an April-March cycle to align with that of the government, there is a possibility there could be another transfer during the year as the Centre struggles with stretched finances.