Karnataka's share of green energy rockets in past fiscal 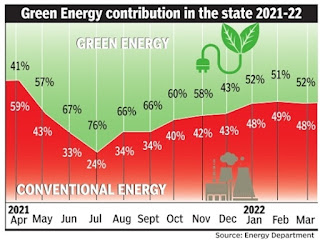 Despite an acute shortage of coal in the country, Karnataka has largely been insulated from the crisis thanks to an increase in green energy generation. In the past fiscal, Karnataka saw a huge spike in green energy – from solar, wind, and mini-hydel power plants – which has ensured minimal disruption of supply.

While other states with a high dependency on the fossil fuel have struggled, Karnataka has augmented supply from thermal power plants with loads of renewable energy. In fact, officials say Karnataka could have ensured 24/7 uninterrupted power supply but for serious issues with transmission largely stemming from poor maintenance and lack of adequate infrastructure.

“The system put in place to utilize as much green energy as possible has helped the state fare better than others in maintaining supply,” said Kumar Naik, additional chief secretary for energy. About 51% or 15,833 megawatts of the state’s installed capacity of power generation is from green sources.

As per data from the energy department, from meeting 41% of demand in April 2021, the increase in green energy use climbed to 76% in July 2021, before ending March 2022 at 52%, an average of 58.6% for the fiscal. For example, in July last year, of the average daily consumption of 5400MW, only 1,250MW came from conventional sources. The remaining came from green sources. The state even raked in Rs 2,836 crore last year alone from selling excess power.

So why then are there power cuts? Officials point to creaking infrastructure. One energy department official said the state could have supplied more than the 6,578 million units it did last year in Karnataka but could not simply because the grids cannot handle a higher load. The lack of storage capacity for renewable energy is another hurdle.

Officials say there are two reasons for the spike. First, Karnataka has a ‘must use’ clause, which means renewable energy power purchase agreement conditions must be exhausted before using conventional resources. Second, the impact of pandemic-induced lockdowns drove demand for power down.

However, the department insists it can deal with rising demand now that the economy is emerging from a Covid-induced slowdown.

The department has set up a separate renewable energy maintenance cell that keeps track and even forecasts weather to assess availability of power from green resources. “We are now trying to build storage infrastructure to meet futuristic demands,” said Naik, adding that pumped storage facilities  are being given priority