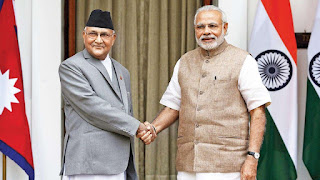 Nepal PM Sher Bahadur Deuba raised the outstanding border issues between India and Nepal with PM Narendra Modi in their summit meeting on Saturday and urged India to resolve the disputes through established bilateral mechanisms. Foreign secretary Harsh Shringla said after the meeting that there was a “brief discussion” on the issues and there was a “general understanding” that they needed to be addressed in a responsible manner through dialogue and without any effort to politicise it.

The summit saw India and Nepal signing four agreements to boost connectivity and energy cooperation and also inaugurating several other projects, including introduction of Rupay card in Nepal for financial connectivity.

Modi and Deuba issued a vision statement for cooperation in the power sector and agreed to expedite work on the delayed Pancheshwar multipurpose dam project that was described by Modi as a gamechanger for the development of the region. Deuba complimented Modi for India’s “effective management” of the pandemic situation and thanked India for vaccines and other medical aid.

“We also stressed on maintaining close cooperation between our defence and security institutions,” said Modi. Apparently under pressure from allies and opposition to raise the border issue, Deuba said towards the end of his opening remarks, “We discussed the boundary matters and I urged him (Modi) to resolve these through established mechanisms. ”

Nepal says there’s already a foreign secretary-level mechanism to address the border issue and that it should be activated to resolve the disputes.

The Kalapani border dispute has plagued bilateral ties for the past few years, not least because of Nepal’s decision to issue a new political map, showing disputed areas in it, following India’s own new 2019 political map.

Shringla said the two sides had agreed that given their close ties, they should not politicise the border issue. “I think what is important between two close and friendly neighbours is that you have the ability to sit down, discuss and sort out these issues in a manner that is obviously satisfactory to both sides.We have done that. You’ve seen that we have sorted out land as well as maritime boundary with Bangladesh in an amicable manner. The two sides have had a brief discussion, and generally felt that, in order to start addressing this issue, we need to have dialogue and discussion in a responsible manner,” he said.

In his opening remarks, Modi also thanked Deuba for Nepal’s full support in “resolving bottlenecks and facilitating the time-bound completion of all India-assisted projects, including the National Police Academy at Kavrepalanchowk, the Integrated Check Posts at Nepalgunj and Bhairahawa and the projects under the ‘Ramayana Circuit’”. Modi called for taking full advantage of opportunities in the power sector, including through joint development of power generation projects in Nepal and development of cross-border transmission infrastructure. “We also agreed on the subject of more participation by Indian companies in Nepal’s hydro power development plans. It is a matter of happiness that Nepal is exporting its surplus power to India. It will contribute well to the economic progress of Nepal. I am glad to inform that many more proposals to import power from Nepal are also being approved,” he said.

According to the joint vision statement, Nepal invited Indian companies to invest in the development, construction and operation of viable renewable power projects, including in the hydropower sector in Nepal, including storage-type projects, through mutually beneficial partnerships.