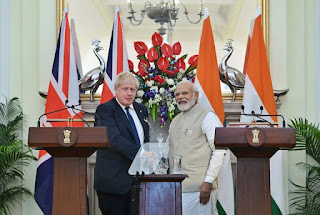 Indicating his keenness for a trade agreement with India, British Prime Minister Boris Johnson set an ambitious target of clinching a deal by Diwali, minutes after PM Narendra Modi spoke of a year-end deadline for negotiators from both countries.

“Teams from both countries are working on an FTA (free trade agreement) and there is good progress. We have decided to attempt to finalise the FTA by the year-end. In the last few months, India has signed FTAs with UAE and Australia. We would want to move with the same pace and commitment with the UK too,” Modi said at a joint press conference, as he pitched for investments in infrastructure.

India had finalised a trade pact with the UAE in less than 90 days, and it just took six months for New Delhi and Canberra to seal a deal.

Pointing to the talks, Johnson said: “. . . perhaps most significantly for the long term, we are making full use of the freedom that we now have to reach a free trade agreement, a deal where you can lift those tariffs—you can, India, Narendra, on our machinery and apples—actually you’ve already done it on apples, so thank you for the apples, and we in turn, we can lift the tariffs on your rice and textiles. ”

With the next round of discussions slated to begin next week, he said, four of the 16 chapters have been finalised and new measures to make it easier to export UK-made medical devices to India and ensure mutual recognition of UK higher education qualifications were finalised on Thursday.

Referring to the proposed FTA, Johnson said: “This could double our trade and investment by the end of the decade widening that living bridge into a multi-lane motorway—with beautiful jointly made electric vehicles and creating hundreds of thousands of new jobs in both our countries. ”

Currently, the UK is India’s 17th largest trading partner with bilateral trade estimated at over $16 billion (during April-February 2021-22). The UK is the sixth largest overseas investor, with FDI inflows between 2000 and 2021 being pegged at a little under $32 billion.

With several ticklish issues, settled in the FTA with Australia, the central government is hoping that it would be easier to finalise an agreement with the UK, which also finalised a deal with Canberra recently.

Besides, with the UK, India has also agreed to tread into areas such as intellectual property rights, sustainability, competition, women and MSMEs and anti-corruption, apart from goods, services and investment, where it was reluctant to engage in the past.