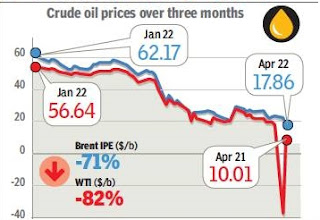 The government is readying a lifeline for oil producers such as ONGC and Oil India as the chaos in the global oil market deepened, with International benchmark Brent dipping just below $16, the lowest since 1999, before settling at $21.16.

Government sources said the oil ministry has proposed a set of measures to help domestic oil producers tide over the price crash that has led them to lose money heavily on each barrel they pump and will turn their projects into white elephants.

The options on the table at the “highest levels” of the government include a graded tax relief, soft loan from Oil Industry Development Board’s corpus created from cess on domestic oil production and pricing on a par with the landed cost of imported crude. The department of public enterprises also reviewed the situation on Wednesday as part of the exercise.

A relief package has become crucial for the survival of producers as the price crash since March has turned oil production into a loss-making proposition. For example, the total cost of a barrel of oil produced by ONGC works out to $45 after including royalty, cess and sundry other levies.

So, at Wednesday’s closing price of Brent, the company will actually end up paying from its pocket, affecting its dividend and corporate tax payout to the government.

ONGC, sources said, has asked the government to abolish oil development cess if price realised by producers is less than $45 per barrel