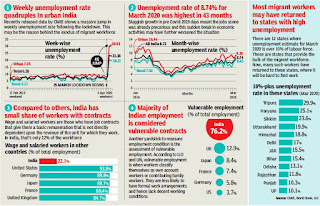 India’s salaried population is only a small fraction of its total work force — which explains why so many migrants had to move out of cities when the lockdown was announced on March 24. The International Labour Organisation estimates that only 22% of India’s workforce falls under the category of salaried employment while 78% had no assured salary and hence was bound to suffer during this period.

Among major economies, India also ranks at the bottom on another parameter with more than 76% of workers categorised as being in vulnerable employment. That is, people classifying themselves as ownaccount workers or contributing family workers. Such workers are less likely to have formal work arrangements and hence lack decent working conditions and social security. Also, in a lockdown, many such people (like a cigarette shop owner) would be rendered jobless.

CMIE’s weekly unemployment data is collated by a survey. The survey for the last week of March had to be ended abruptly because of the lockdown and is based on 2,289 observations evenly spread over rural and urban areas, it said.