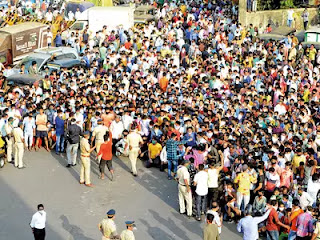 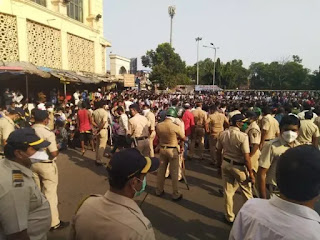 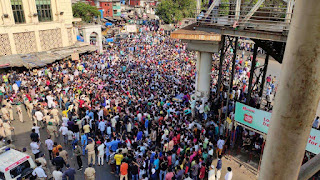 Within hours of Prime Minister Narendra Modi announcing the extension of lockdown until May 3, around 2,000 migrant workers gathered at Bandra station yesterday afternoon and demanded a way back home. While most of them were daily wage workers, sources said residents of nearby slums also joined them. The police resorted to lathi charge to disperse the crowd.

While some sources said rumours of special trains for migrant workers created the confusion, others said the workers were angry as they had booked train tickets for their home towns, presuming that the lockdown would be over on April 14. However, the Indian Railways’ subsidiary IRCTC said all booking windows have been closed since the lockdown was first announced but online booking was open from April 15. The Railways has now suspended booking until further orders.

Meanwhile, the Government Railway Police from Bandra said they had cordoned off the suburban station after realising that hundreds of workers were beginning to gather nearby. GRP officials said the migrants didn’t make any attempt to come near the station. Some officials said if they had booked tickets to go back home, they would have assembled at the Bandra Terminus and not the suburban station.

In the evening, Home Minister Amit Shah spoke to Chief Minister Uddhav Thackeray and expressed concern over the situation and offered full support. Later, while addressing the state via social media, Thackeray told the labourers, “We are fully behind you. Don’t feel that you are being ignored. We all are Indians and we should fight this calamity together.” Late in the night, state home minister Anil Deshmukh tweeted that he will order an investigation into rumours that trains were taking migrant workers back home.

Police officials said migrant workers from West Bengal and Uttar Pradesh living in the Patel Nagri colony in Bandra had assembled at the bus depot near the railway station at 3 pm. They raised slogans demanding immediate arrangement of transport to their home towns. By 5 pm, the crowd grew bigger, unmanageable and angrier.

Police spokesperson and Deputy Commissioner of Police Pranay Ashok said the officials tried to calm down the workers through dialogue. Another police official said the public announcement system of a nearby mosque was used to address the workers and they were also offered food packets. However, it reportedly led to confusion and chaos. Ashok said the police had to use light force to disperse the crowds after some of them got aggressive during the discussions. The Bandra police have registered an offence against hundreds of unknown persons under various sections of the Epidemic Act.