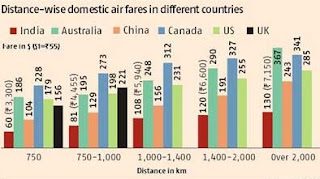 Average domestic air fares in India have been found to be lower than some major world aviation markets, including the US and Britain, according to a study based on International Air Transport Association (IATA) data.
The finding has come in the backdrop of the Directorate General of Civil Aviation (DGCA) asking Indian carriers to make ticket prices more rational and reasonable, following a recent outcry over a major fare increase on various domestic sectors.
A comparison of average domestic fares in some nations for air travel above 2,000 km showed those in China were higher than in India by 87 per cent, those in Australia by 182 per cent, in Canada by 162 per cent and in the US by 119 per cent.
Industry sources said while it was evident that Indian domestic fares were the lowest among the major domestic aviation markets, there was a “complete mismatch” between the fares and costs of operation in India.
They said the operating costs in India were much higher than these countries due to high taxation on jet fuel, rupee depreciation and airport charges, which were contributing to significant losses for the Indian carriers.