20-year wait for Bogibeel Bridge over Brahmaputra to end 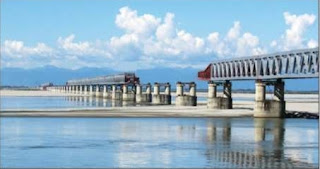 Taking your car on the ferry to cross the mighty Bramhaputra will be a thing of the past once India's longest rail-cum-road bridge is commissioned in December. You will be able to zoom across the 4.94 km long Bogibeel bridge connecting Assam to Arunachal Pradesh. Ironically, the technological wonder that is India's first fully steel-welded bridge has been under construction for 14 years, and carries the unflattering tag of being one of the slowest moving infrastructure projects in the northeastern part of the country. Now, only one pillar is left to be completed.

Former PM Atal Bihari Vajpayee of the BJP-led NDA had flagged off the project way back on April 21, 2002. His successor in the next BJP government, Narendra Modi, is scheduled to open it to traffic this year-end. But the foundation stone of the mega project was laid long ago, by H D Deve Gowda, on January 22, 1997.

The Bogibeel undertaking has been plagued by several time and cost overruns. With an outlay of Rs.600 crore added this year, the final cost of the bridge will touch Rs.6,000 crore. The original budget was Rs.1,767 crore.

The bridge is double decked, with two railway lines on the lower deck and a three-lane road on the upper deck flanked by pavements on either side.

The Bogibeel bridge was one of the major promises made by the Centre during the Assam peace accord of 1985 to promote economic development of upper Assam.