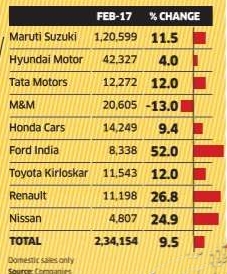 Passenger vehicle sales rose 9.5% in February as buyers continued to regain confidence and shook off any lingering effects of demonetisation, buoyed by new launches, especially in the utility vehicle segment, such as Maruti Suzuki's Vitara Brezza. Car makers sold 2,56,342 units in February, up from 2,34,154 in the year-ago period.

The country's largest car maker Maruti Suzuki continued to fare well, reporting an 11.5% rise in domestic sales to 1,20,599 units.Though sales of small cars such as the Alto and WagonR declined by 6.8% to 33,079 units, those of compacts such as the Swift, Ignis, Celerio, Baleno and DZire rose 9.4% to 47,002 units. Sales of the Ciaz sedan rose 14% to 5,886 units. Demand in the utility vehicle segment more than doubled to 17,863 units, led by strong demand for the Vitara Brezza.

Hyundai Motor India enjoyed strong demand for the Creta with overall sales up 4% to 42,327 units. With sales of 9,002 units, the compact SUV accounted for nearly a fifth of this.

Passenger vehicle sales rose 14.4% to 2,65,320 units in January as auto makers replenished stocks in the new year. Sales of passenger vehicles had declined by 1.36% to 2,27,824 units in December on account of the cash crunch post demonetisation. In November last year, sales growth slowed to 1.82%, having risen 4.48% in October.

Toyota's February numbers rose 12% to 11,543 units on the back of the refreshed Fortuner and Innova.

Honda Cars India, which struggled to boost sales last year, benefitted from the upswing in sentiment. Buoyed by the newly launched City, the company posted a 9.4% increase in monthly volumes at 14,249 units.