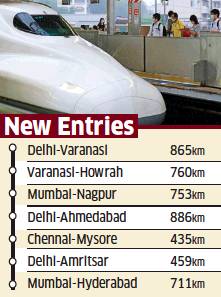 Work on a detailed project report for the proposed Delhi-Varanasi high-speed rail corridor has begun on the instructions of the central government.

The 865-km-long corridor is one of the eight HSR passageways that have been proposed to optimise high-speed rail connectivity between major cities and give an impetus to the industrial sector. Work has already started on the 508-km-long Ahmedabad-Mumbai corridor that will see bullet trains running at 320 km per hour.

Once the Delhi-Varanasi corridor is ready, a bullet train could reduce travel time between the two cities to about four-and-a-half hours. Last year, India’s first semi-high-speed Vande Bharat Express train was flagged off between New Delhi and Varanasi.

The proposed link between Varanasi and Howrah is the latest addition to the government’s HSR corridor plan. Earlier his month, NHSRCL had invited four bids related to data collection, preliminary designs, and survey work for the preparation of the detailed project report of the Delhi-Varanasi HSR corridor. “The collection of relevant data for the preparation of interim detailed project report is under process. The location of stations will be proposed after survey reports and consultation with the government,” Gaur said.