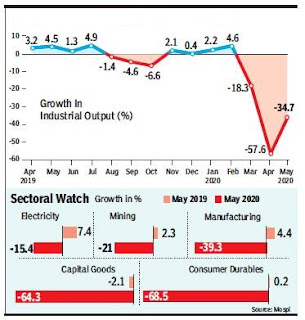 The country’s factory output contracted sharply for the third consecutive month in May as the national lockdown imposed to contain the spread of the deadly coronavirus took a toll on several sectors such as manufacturing, but the pace of decline narrowed.

The National Statistical Office only released the index numbers as a majority of the industrial sector establishments were not operating since the end of March. This has had an impact on the items being produced by the establishments during the period of lockdown and the subsequent periods of conditional relaxations in restrictions, it said.

The government had earlier said that it would not be correct to compare the numbers with the previous months due to data constraints.

The capital goods and consumer durables sectors recorded sharp contractions of over 60% in May, highlighting subdued investment climate and weakness in consumer demand in the economy. However, the extent of negative growth has been lower in May than April, economists said.

Economic activity has restarted and several sectors have shown some pickup in demand, prompting the government to say that green shoots of revival are visible. But the economy remains under severe stress with most forecasts pointing to a deep contraction in 2020-21, with a possibility of a feeble rebound next year.