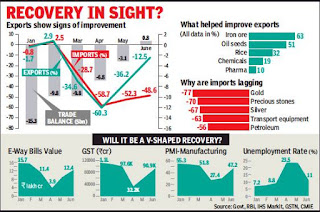 India may register its first monthly trade surplus in over 18 years in June as the pace of contraction of exports is estimated to have slowed down to around 12%, while imports are seen to have fallen almost 49% during the month.

Initial estimates for June, available with the commerce department, show a trade surplus of around $786 million, with imports pegged at $21.1 billion and exports at $21.9 billion. The last time India had a positive balance on the trade account was in January 2002 when it had a surplus of $10 million with exports of $4.3 billion.

On Friday, commerce and industry minister Piyush Goyal had said that exports in June 2020 had touched 88% of June 2019 level due to unlocking of the economy and resumption of activity. The latest numbers, which will be officially released on July 15, indicated that the pace of export contraction has moderated as industries opened up (see graphic).

Policy makers, however, said that the overall pace will pick up as there is greater unlocking. Even now, given the fast growth in the number of Covid-19 cases, businesses are not fully open and discretionary spending has remained weak due to the adverse sentiment. Several sectors, including iron ore, which may have gone to China, food products such as rice, other cereals, fruits and vegetables and oil seeds reported healthy growth, the initial data shared by customs authorities showed.

But imports remain an area of concern, as it is a barometer of overall economic activity. The initial numbers suggest that the sharp decline in imports was led by gold, silver and precious & semiprecious stones, which are also linked to exports. During crises, demand for jewellery drops significantly as people look to conserve cash. Similarly, the value of oil imports was down over 55% due to a fall in global crude prices.

Imports related to the textiles sector — including cotton, fabric and made-ups — are also down sharply along with transport equipment, chemicals, iron & steel, machine tools and electronics, indicating a slump in economic activity. Some of it may also have had to do with customs going slow on clearances at ports towards the end of the month.