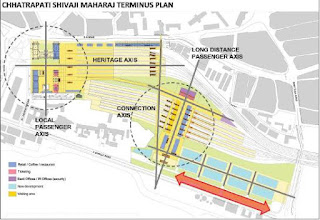 The Chhatrapati Shivaji Maharaj Terminus is all set to get an airport look from inside with its heritage look intact from the outside. The Indian Railways has decided to undertake the five-year project under the Public-Private Partnership model, which will include brand new platforms, foot overbridges (equipped with escalators), new offices, a mall, a five-star plaza and even a hotel, with a waiting area double the current size. The project will not tamper with the height of the station, which is 24 mt.

The Railway Board has already approved the master plan and the project will be undertaken by the Indian Railway Stations Development Corporation Ltd., the implementation arm of the railways.

Sanjeev Kumar Lohia, the managing director and CEO of IRSDC said a request for qualification will be invited from private parties after a nod from the PPP appraisal committee, which is the highest authority for approval. The committee comprises representatives of the Ministry of Home Affairs and the Ministry of Railways.

Similar redevelopment has been planned for seven other railway stations, namely Thakurli, Kalyan, Lokmanya Tilak, Dadar, Andheri, Bandra Terminus and Borivali. While consultations for the Thakurli station master plan are under way, a draft conceptual plan is ready for the other stations. Whenever ready, a user fee, just like the airports, will be levied on passengers and visitors through platform or parking charges. This will be one of the main revenue streams for the concessionaire.

CSMT is the first railway station of the city to be redeveloped under the PPP model. It handles over 1,000 local trains and nearly 100 long-distance trains. Prior to the Covid-19 crisis, it had an average daily footfall in the range of five to six lakh. Recently, a conservation project was undertaken for the terminus, which will be improved upon as part of the redevelopment. A senior IRSDC official said all new construction will not be taller than the current height of 24 metre.

Earlier in June, IRSDC had opened RFQ applications for Nagpur, Gwalior, Amritsar and Sabarmati railway stations and shortlisted a few developers under the PPP model. As part of a nationwide plan, the railway authorities are looking at a huge capital investment in station infrastructure in the next five years.