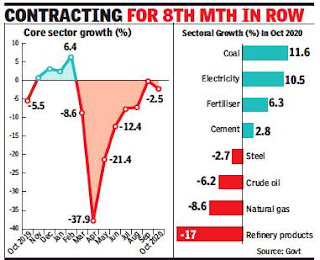 Core sector output contracted by a higher than expected 2.5% during October, due to a sharper fall in refinery output and lower steel production, although coal and electricity reported a double-digit rise after a resumption in economic activity. With the September reading revised to a 0.1% decline, compared to the earlier estimated 0.8% decrease, this is the eighth straight month of falling output. Core sector has a bearing on the overall industrial production data as it carries a weight of 40%.

“Despite a low base and improvement in business activities amid unlocking of the economy, the fall in core sector output in October does show some volatility on the production side. Further unlocking of the economy could push this growth into positive territory in the next month. However, certain localised curfews imposed in a few states could weigh on production activity to some extent. IIP growth for this month may be expected to be between -1to 0%,” CARE Ratings said in a report.

While ICRA appeared more optimistic on industrial production, projecting a 4-7% rise due to stocking up across several sectors in anticipation of festival demand, it was cautious going forward.