India has highest bribery rate in all of Asia 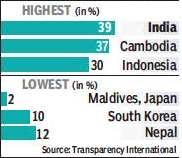 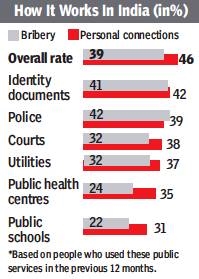 Only 47% of people surveyed in India believe that corruption has increased over the past 12 months and 63% believe that the government is doing a good job in tackling corruption. Perhaps, the ‘feel good’ factor ends here.

India has emerged as having the highest bribery rate of 39% in the Asian region. It also has the highest rate of people (46%) who used personal connections to access public services, according to a recent survey-report released by Transparency International, a global civil society. Nearly 50% of those who paid bribes were asked to, while 32% of those who used personal connections said they would not receive the service otherwise.

Cambodia had the second highest bribery rate of 37%, followed by Indonesia at 30%. The Maldives and Japan maintained the lowest overall bribery rate (2% each), followed by South Korea (10%) and Nepal (12%). However, even in these countries, governments could do more to stop bribes for public services, pointed out Transparency International.

In Japan, only 4% of those who accessed public services had to rely on personal connections. While the percentage figure in India was significant at 46%, it was also relatively high at 36% in Indonesia.

In an earlier report, issued by Transparency International, which was released in January at Davos at the World Economic Forum, India had been ranked at 80th position among 180 countries in the Corruption Perception Index.

For this newly released survey report, ‘Global Corruption Barometer–Asia’, Transparency International surveyed 20,000 people across 17 Asian countries—largely between June-September this year, seeking their perception of and experiences with corruption in the past twelve months. Six key public services were covered in the report, viz: police, courts, public hospitals, procurement of identity documents and utilities.

An issue of concern, reflected in the report is that while reporting of corruption is critical to curbing the spread, as many as 63% of those in India were particularly concerned about retaliation.

While vote-buying was the highest in Thailand and the Philippines where 28% were offered a bribe in return for a vote, followed by Indonesia at 26%, India came fourth in the line with a rate of 18%.