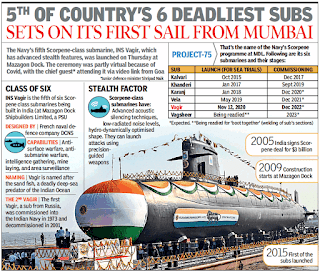 The country’s fifth Scorpene submarine ‘Vagir’ was `launched’ at the Mazagon Docks. The diesel-electric 1,565-tonne vessel, which will now undergo extensive tests, harbour and sea trials, is likely to be delivered to the Navy in 2022. Under the over Rs.23,000 crore ‘Project-75’ under way at MDL for construction of six French-origin Scorpene submarines, the Navy has commissioned two vessels, INS Kalvari and INS Khanderi, till now.

The third submarine ‘Karanj’ is now in the last phase of sea trials, while the fourth ‘Vela’ has just begun them. The sixth named ‘Vagsheer’ is likely to be ready for commissioning by 2023, said officials.

Though the Scorpene project has faced huge time and cost overruns, it is critical for the Navy since it currently has just 13 other ageing diesel-electric submarines, with just half of them operational at any given time.