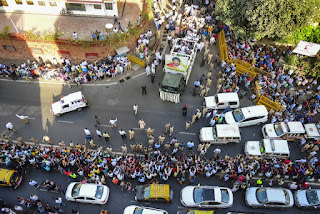 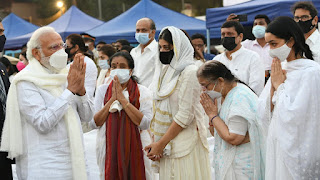 The nation was mourning, social media was brimming with emotions and a sea of teary fans bid adieu to Lata Mangeshkar. Her funeral pyre was lit by Hridaynath Mangeshkar. The legend breathed her last at the age of 92 at the Breach Candy Hospital in Mumbai on February 6. She was cremated at Shivaji Park in Mumbai, in the presence of fans, family, celebrities and politicians. She was cremated with full state honours. The Government of India also announced two days of State morning as a mark of respect. During State mourning, the National Flag will be flown at half-mast from Feb 6 to 7 throughout India.

PM Narendra Modi arrived from Delhi to attend Lata Mangeshkar’s funeral. Shah Rukh Khan, Sachin Tendulkar, Ranbir Kapoor, Shankar Mahadevan, Javed Akhtar and several others paid their last respects to the legend at Shivaji Park. Lata Mangeshkar was diagnosed with Covid-19 and pneumonia in January. Her health briefly improved but on February 5, her condition deteriorated. Dr Pratit Samdani shared the sad news of Lata Mangeshkar’s demise and said, “It is with profound grief that we announce the demise of Lata Mangeshkar at 8:12am. She has died because of multi-organ failure after more than 28 days of hospitalisation post #COVID19.”

In a glorious career spanning seven decades, Lata Mangeshkar sang over 30,000 songs in different languages. She was the oldest of the siblings, Meena Khadikar, Asha Bhosle, Usha Mangeshkar and Hridaynath Mangeshkar.