Mumbai & Bengaluru among top 10 most congested cities in world 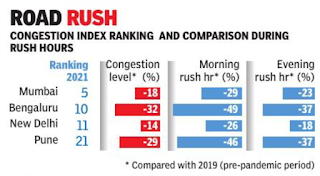 Despite Covid-induced lockdowns keeping a large number of vehicles off the roads in 2021, Mumbai and Bengaluru have been ranked 5th and 10th in the global ranking of urban congestion during the period while Delhi and Pune occupied the 11th and 21st spots among 404 cities across 58 countries, according to a report by a global location technology company.

However, the congestion level in Delhi during 2021 was 14% less than 2019 while in Mumbai, Bengaluru and Pune, the level dropped by 18%, 32% and 29% respectively, said the report. The four cities featured in TomTom Traffic Index’s global top 25 list. Istanbul topped the list, followed by Moscow.

The report said India’s congestion level in 2021 was 23% lower than pre-Covid times, with a decrease of 31% specifically during peak hours. In 2020, the traffic congestion in three big Indian cities — Mumbai, Bengaluru and Delhi — made it to the top 10 list in the last edition of the traffic index report. While Mumbai was ranked second, Bengaluru was at sixth position and Delhi eighth among 416 cities across 56countries. According to the report, congestion level in Delhi came down to 48 points in 2021 from 53 points in 2019 and the peak traffic congestion also reduced by 17% in 2021. The city saw its worst traffic day on August 21, when it recorded the worst rainfall in a day. The waterlogged pockets caused widespread traffic logjams and increase in congestion levels.

Sachin Tyagi, strategic automotive business development manager of TomTom said, “Globally, peak hours shifted in almost 40% of the cities and that’s due to the changes in our working habits with work from home becoming predominant and online conferences replacing physical meetings.” He said this could be one of the reasons why Bengaluru, which has a high number of IT firms, saw a sharp decline in congestion level during 2021.