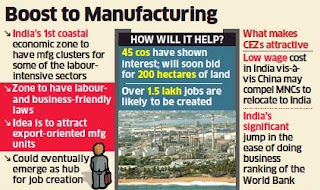 The government has given the go-ahead for setting up India’s first mega coastal economic zone at the Jawaharlal Nehru Port in Maharashtra as part of a plan to develop 14 such industrial clusters to spur manufacturing and generate jobs.

About 45 companies across telecom, auto and IT sectors will soon bid for 200 hectares of land to set up manufacturing units in the zone. The plan envisages a total investment of ₹15,000 crore in the first phase and creation of more than 1.5 lakh jobs.

The Union Cabinet had last year approved setting up of 14 mega CEZs under the National Perspective Plan of the Sagarmala Programme, with an aim to promote development of industrial clusters around ports, encourage portled development, reduce logistics cost and time for movement of cargo, enhance global competitiveness of India’s manufacturing sector and create hubs of job creation.

These zones are expected to provide business-friendly ecosystem including ease of doing business, ease of exporting and importing, swift decisions on applications for environmental clearances, and speedy water and electricity connections.

The Jawaharlal Nehru Port is among the busiest cargo ports in the country, but it has sufficient available land. That is why it has been chosen over other ports to kick-start the concept which was first mooted by the erstwhile NITI Aayog vice-chairman Arvind Panagariya. The port handles over 40% of India’s export-import volume because of deep-draft ports capable of accommodating very large and heavily loaded ships.

CEZs are spatial economic regions comprising a group of coastal districts or districts with a strong linkage to ports in that region to tap into synergies with the planned industrial corridor projects. The country’s first mega CEZ will stretch along north Konkan region spread across Nashik, Thane, Mumbai, Pune and Raigarh.