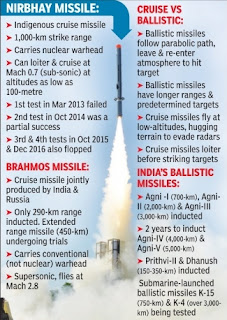 India has successfully flight-tested its indigenous `Nirbhay' (the fearless) land-attack cruise missile, which can deliver nuclear warheads to a strike range of 1,000 km, after a string of failures since March 2013.

The development is significant because the armed forces have for long been demanding nuclear land-attack cruise missiles, with ranges over 1,000 km and versatile enough to be fired from land, air and sea.

Often brandished as India's answer to the famed American Tomahawk missiles, as also an effective counter to Pakistan's Babur LACM, Nirbhay has been in the making for a decade without much success till now.

The sub-sonic missile, designed to carry a 300-kg nuclear warhead, had failed during its first test in March 2013. Though the second test in October 2014 was a partial success, the third and fourth tests in October 2015 and December 2016 also flopped, leading to talk that the project may have to be scrapped.

But the fifth test on Tuesday , at 11.20 am from the Integrated Test Range at Chandipur off Odisha coast, was dubbed a “complete success“ by DRDO. “The flight test achieved all mission objectives completely from liftoff till the final splash. The missile majestically cruised for 50 minutes, achieving the range of 647-km,“ said an official.

Defence minister Nirmala Sitharaman, on her part, expressed “optimism“ the successful trial would take India into “the select league of nations that possesses this complex technology of sub-sonic cruise missile capability“. A series of successful tests of this groundlaunched version of Nirbhay will pave the way for its induction into the armed forces, though its sea-based variant capable of being fired from nuclear-powered submarines will be the real game-changer.

Ballistic missiles like the Agni follow a parabolic trajectory , leaving and re-entering the earth's atmosphere before hitting their targets. Cruise missiles like Nirbhay, in turn, are designed to fly at low-altitudes, almost hugging the terrain, to evade enemy radars and missile defence systems.

“Nirbhay has the capability to loiter and cruise at Mach 0.7 at altitudes as low as 100-metre,“ said the official. After an initial blast-off with a solid-propellant booster rocket engine to gain speed and altitude, Nirbhay deploys its smallish wings and tail fins in the second-stage to thereafter fly like an unmanned aircraft. It's designed to be highly maneuoverable with “loitering capabilities“ to first identify and then hit the intended target with precision.

The supersonic BrahMos missiles, produced jointly with Russia, have already been inducted into the armed forces. But the BrahMos, which flies almost three times the speed of sound at Mach 2.8, is meant to carry only conventional warheads and currently has a strike range of only 290 km.