Over 1.04 crore people flew within the country in festival-packed October, the highest-ever domestic travel traffic India has seen in a month. According to DGCA figures, this is only the second time the monthly domestic traffic has breached the one-crore mark— the first was this May at 1.01crore.

However, the growth comes as major Indian airports face a severe infrastructure crunch.

More than 150 million passengers are expected to take flights from Indian airports in the next financial year (2018-19), making the country the world’s third largest aviation market for departures.

Overall, India is on its path to become the third largest aviation market — both departing and arriving passengers — after the US and China by 2025, according to global airlines’ body International Air Transport Association. But CAPA estimates that India will get there by the end of 2022-23. Indian airports are estimated to serve over 460 million flyers that financial year, up from 265 million in 2017-18.

But Indian airports are ill-prepared for the increase.

This could mean passengers boarding from many airports could face long queues at check-in, security, immigration counters, longer flight delays and higher airfares. Indian airport system is expected to exceed its maximum structural capacity by FY 2022 and this level could be breached earlier if the new airport projects are delayed.

Maximum structural capacity is the maximum passengers an airport can handle if all the possible infrastructure and operational improvements are carried out. Beyond this, the only option would be to go for a new airport at a different site.

Major airports such as Mumbai, Delhi and Chennai are at the highest risk of saturation. Smaller airports like Agartala, Dehradun, Guwahati, Jaipur, Kozhikode, Lucknow, Mangalore, Pune, Srinagar and Trichy are operating beyond their design capacity. For airlines, the big challenge would be getting arrival/departure time slots and parking bays. 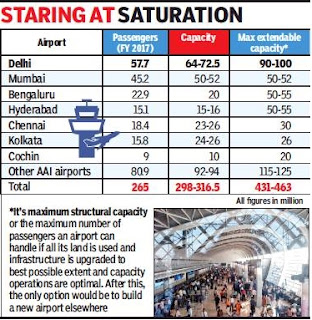