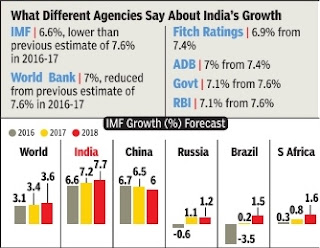 The International Monetary Fund has cut India's economic growth estimate for 2016-17 to 6.6% from its earlier projection of 7.6% due to the impact of the government's move to scrap some high value currency notes in early November.

The forecasts are for calendar year for several economies, while for India it is based on the fiscal year (April to March).

IMF has so far maintained that India is a bright spot against the gloomy global economic outlook. But its January estimate shows that the multilateral agency expects a larger dent to the economy due to demonetisation.

Earlier this month, the World Bank cut the country's growth estimate to 7% for 2016-17 from its previous projection of 7.6%. RBI has also lowered its GDP growth estimate for the current fiscal to 7.1% from 7.6%. The IMF revised upwards China's estimate based on expectations of a stimulus.

Rating agency Moody's and its Indian affiliate, ICRA have said that domestic economic growth will slip to 6.6% in 2017 from 7% in 2016 as the economy moderates after demonetisataion, with a likely pick up in the second half of the year. However, India will remain one of the fastest growing major economies globally in 2017. 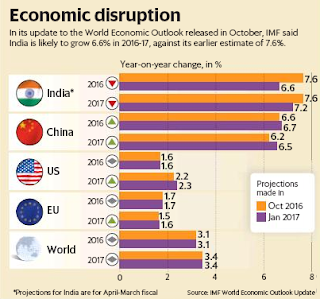