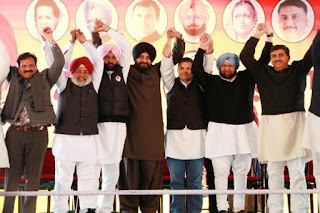 Congress vice-president Rahul Gandhi kicked off his three day Punjab tour by declaring Captain Amarinder Singh as the party's chief ministerial candidate. Speaking in Majitha, an Akalis stronghold, he promised to bring in a tough law to wipe out “chitta“ and jail those responsible for “playing with the lives of the youth“ if his party comes to power in the state.

Amid loud cries of `Jo Bole So Nihal' from the crowd, Rahul Gandhi lauded Captain Amarinder as an experienced leader who had given his sweat to Punjab. Rahul said the PPCC president would once again fulfil every promise made to the people of Punjab.

Flanked by Captain and the party's star campaigner and Amritsar East candidate Navjot Singh Sidhu, Rahul appealed to the people to join hands with the Congress to revive the fortunes of the state and to collectively work towards the establishment of Punjabiyat.