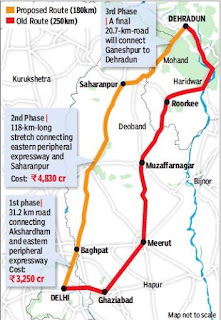 An elevated expressway that will shrink the distance between Delhi and Dehradun from 250km to 180 km got an in-principle approval from the Centre.

A communique from the office of Uttarakhand CM Trivendra Singh Rawat confirmed this after National Highways Authority of India chairman S S Sandhu met him in Dehradun. “With the completion of the elevated road, the distance can be covered in as little as two and a half hours,” the CM said.

It now takes five-six hours to drive from Delhi to Dehradun. While the existing road between the two cities passes through Meerut, Muzaffarnagar and Roorkee, the new one will touch Baghpat and Saharanpur.

Terming the project as a major initiative for boosting connectivity to the Himalayan state, Rawat said, “The elevated road will give a major fillip to tourism and prove to be a big factor in the the state’s economic development.”

NHAI officials gave a presentation to Uttarakhand chief secretary Utpal Kumar Singh about the elevated expressway project, which will be executed in three phases.

The first phase, as per information made available by the chief secretary’s office, will be 31.2 km long, connecting Akshardham in Delhi and eastern peripheral expressway, which will include a 18 km stretch of elevated road. The total estimated cost of the first phase has been pegged at Rs.3,250 crore.

The second phase, which is the biggest among all the phases, will connect eastern peripheral expressway and Saharanpur. The 118-kmstretch will be constructed at a cost of Rs.4,830 crore.

The last phase of 20.7 km will connect Ganeshpur to Dehradun. This phase will include construction of a 1.8 km-long tunnel, an additional tunnel of 400 metres near Dehradun's Daat Kali temple and an elevated road of 6.8 km.

As part of the mega project, a new tunnel at Mohand has also been proposed, NHAI chairman S S Sandhu informed Rawat. Sandhu said some part of the proposed elevated expressway passes through neighbouring UP and he requested the UP government to expedite the forest and wildlife clearances so that the construction work of the expressway can start soon.